No, that is not the name of an Indian chief. It’s what happened to my foot, and no, it had nothing to with my mouth this time.

Night before last, my friend Abbott stepped on it. It was a hammer toe to begin with; so it was already quite misshapen. No, I do not wear spike heels with pointy toes. Anyway, so now the toe is purple and swollen. While I have a predilection for purple, I do not like it on my toe.

What are you going to do about it?

According to the internet, it will probably heal on it’s own; however, they don’t have a page for both hammer and broken. You can read about broken or hammer, but not broken hammer. Ice, ibuprofen and elevation are the answers. None of which are conducive to spending time on the computer. Well that’s not entirely true, it’s only the ice and elevation that will inhibit my proclivity for spending time here.

Yes, I’m such a baby when it comes to pain, and quite ruffled by not being able to do exactly what I want, when I want. Hmmm… I’m not only a baby, but a spoiled baby as well. Curses and claws, maybe that’s what I should read about – claw hammers.

“When you get to the end of your rope, tie a knot and hang on.”

Back online proper. Thank God! Don’t really know what was wrong, but after deleting a couple of programs, running scandisk, disk cleanup and defrag things seem to be okay again. Don’t you hate that? The absolute worst.

Just send off thesis copies to other readers. Now must get student loans deferred one more time. Here’s the new painting. The actual size is 18″ x 24″. This one looks better in “real life” than it does on the net.

How boring! How furstrating! Lucky for me I have good ole Netzero as a backup. So finally I connect; go to my isp (cheap, cheap, cheap) Hawk Comunications, where until now I’ve encountered very few problems. No sign there of any down for service etc. It’s that damn check your password crap. Now we all know our freaking passwords; so I’m stumped. Already tried the old “if in doubt reboot”, NOT. Anyway, if you don’t see me for awhile, it’s because I can’t connect.

1.) What’s the best thing you did over the holiday weekend?

Very traditional Memorial day picknic yesterday complete with grill and family members. On Sunday I had a friend over for brunch and on Saturday night I had several friends over for cocktails. All in all I had a great weekend so I find it hard to choose.

2.) Who would you want to spend the afternoon/evening with getting the answers to all your questions? What do you really want to know from this person/animal?

My painting instructor would be my person to spend the day with. I have many questions about color, and combinations of color.

3.) Why do you think “there must be more to life than having everything“?

Having everything would be a good place to start, although they say the lottery winners invariably go down the tubes. What is there to want that’s not included in everything. It’s the thing word. People are not things, however much they act as if they were, and you can’t have them really, but you can relate to them. So I would have to say, relationships are the more that make the recipe exquisite. That’s what the “crazy” little dog Jenny found out too.

The summer solstice is June 21st.

It’s a day of magic and ritual, and right now it’s lightening outside like crazy, so I’ll have to get back to you on this. Oh hell with it anyway, I just hope it’s not raining in the kitchen! NOT there it goes again; better sign off for now.

Well, the thunder and lightening are farther off now, and we’re twenty minutes closer to the solstice. The longest day, one thing that means is that the long shadows will be much later in the evening. That special light that I love to paint will be later in the day. The solstice means new beginnings and wondrous mystery.

Do you really believe all that stuff on the link?

No, but I do believe there are times for rituals, and the rituals impart the meaning and mystery of the unconscious to the conscious. Rituals enable us to glimpse what is behind the vale if only for a moment. We find ourselves awake and aware that we are awake, in other words conscious of being conscious. It’s like becoming lucid in a dream; only this time it’s becoming lucid in waking life. I’m not trotting out that stuff about “life is a dream/illusion”, although the waking up bit does have that flavor. A heightened sense of awareness (self-awareness) is the key concept, because one must first be aware of oneself, before one can appreciate the value of another awareness.

Where are you going with this?

Once I felt I was the moon, and the moon was me, and it was visual as well as mental. It was along time ago, and I was practicing an eye focus technique from one of Carlos Castenada’s Don Jaun books. If you’ve ever seen those Third Eye books, that’s the kind of letting your eyes change focus I’m referring to. So there I am lying in bed, my head pointing towards the north, and I can see the full moon outside my window. Once my eyes had focused on the moon so that I was seeing two moons, I tried to focus on a spot between the two moons. At that moment the moon and I were one. I was terribly aware of myself and not, and at the same time aware of the moon, and not.

Why are you telling us this?

Because it has to do with the moon, rituals, and magic and I think on the summer solstice we should all perform a little magic. 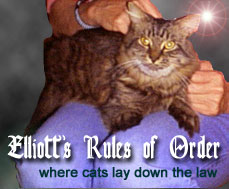 Yes, that’s my cat Elliott, who’s taken over the controls. Do not attempt to adjust your monitor, or try distract him with your mouse. He’s here to tell you about another project.

If you are among the fortunate few owned by your cat, you are hereby ordered to go participate in the Cat Bloggers Project. Furthermore, you will refrain from all things not cat related, or else you will visited by the kittykat police.

My goodness your cat is so bossy. What else does he want me to do?

He strongly suggests that you visit the new blog luf, where Leah and Judean exchange/rearrange ideas about luf, life, friendship and art.

Will we be seeing more of Elliott?

He’s trying to convince me he should run an advice column here on Thursdays. He does seems to have a firm grip on mouse technology, Jungian shadow chasing, the psychology cattiness, and he has catty-cornered the market on catophobia.