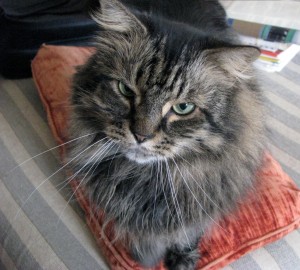 Exactly my point, no pun intended. I don’t seem to have one; kind of all over the place lately.

Aw oh… what you gonna do about it?

Maybe just relax with it for a bit, and see where I end up. Anyway, it’s time to fix dinner now. I guess, I’m lucky I managed to get a haircut yesterday. One thing going on is I’m worried about Gayle, and the whole online dating fiasco that she seems to be setting up.

Why do you call it a fiasco?

Maybe I think it’s going to be a fiasco, and it won’t be. It may actually be worse than a fiasco; it could turn out to be a disaster.

Huh, why do you say that?

I don’t want to say more. Boy, am I getting paranoid or what?

Don’t worry about it, most likely it’s “or what.”

Just stuff, jquery, slimbox, WordPress as CMS. Trying to fix a couple of LCD screens also = desoldering/soldering tiny resistors and getting better at it. However, the damn LCDs still don’t work.

I figured out how to setup and use slimbox with jquery. Better do something with it, before I forget how it works!